The Jefferson Somerset band rocked the night with loud support for the Tigers football team as they dominated the field with a victorious win of 35-16 in the first game of the play-offs Friday night. First quarter, five minutes and ten seconds in, quarterback Javion Patrick (#6) made a touchdown pass to Da’Shon Davis (#11), putting the first score on the board. Jacquez Hughes (#4) left the crowd screaming with excitement as he took a fierce run through the Wewahitchka Gator defense landing a halftime score of 21 – 0. Tigers Kicker Luiz Javier (#25) did not miss a beat when it came to racking up points toward the final winning score. 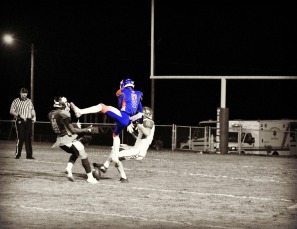 Touchdown Zhyki Price (#2)! The touchdown that he had promised me became reality as I stood proudly on the sidelines. He came through 100%. When I thanked him, he gallantly replied, “Yes ma’am I am a man of my word.” Be sure to follow his football career, it is sure to be brilliant!

Tigers quarterback Josh Aiken (#7) made quite the impressive play as he jumped across the goal line and referees quickly threw their hands up signaling another touchdown! Music blasted loudly in celebration and teammates excitedly danced on the sidelines.

With almost six minutes into the third quarter, known for his incredible speed, Da’Shon Davis  (#11) rushed through the Gators defense adding his touchdown play to the game!

Flags were thrown, and whistles squealed with high pitch as the Wewahitchka Gators fought hard to make a come back and were able to finally place a score.  It had rained for most of the day, and the field was slippery and soggy as they continued to battle hard. By the third quarter disappointment settled in and their emotions started to show defeat as their coach screamed commands from the sidelines in desperation.  The buzzer ended the third quarter and a score of 28-8 could be seen through the foggy mist.

Tigers DT Richard Odom (#76) sat on the sidelines with an ice wrap over his right hand. He played great but was not able to play for the rest of game. He is hopeful that he will be able to play in the second game of the play-offs working toward the road to state championships.

Fourth quarter, the battle continued like war on the football field. Dismayed expressions and jaws dropped as Tigers receiver Armon Williams (#1) jumped and caught an interception! The cheer team raised their arms with triumph and the fans stood in the bleachers clapping with delight. What an exciting moment for this team who has worked so hard this year to make it to state.

The teams met at center field after the final score was called, shook hands for a game well played and Tigers coach Leroy Smith gave out proud parent t-shirts with thankfulness for such strong team support.